“At 2.30am I was woken by a really loud roar. It sounded like lions & it sounded really close. I was a bit nervous, but as earlier, convinced myself that it was a long way off.”

For many people (particularly women) starting solo travel is & should be, a well thought out plan to maximise the opportunity while minimising any risk to safety. That’s the advice I would always give to anyone starting out – keep it easy.

On the other hand, when I was 22 and never really been far beyond France on family holidays, I decided to start by joining an overland tour across Central & Eastern Africa for 3 months. The tour idea is highly recommended, the solo journey via Mombasa & a train to Nairobi to save money wasn’t my smartest ever move… but that’s a story for another day. Needless to say, my Mum was thrilled!

“So, for 3 months I was living in a big blue truck with 15 other people, driving & going on safari during the day, camping & cooking over an open fire every night.”

In total, we visited 9 countries in 3 months (Kenya, Tanzania, Rwanda, Burundi, Uganda, Malawi, Botswana, Zambia & Zimbabwe). It was an amazing trip which certainly introduced me to the joys & challenges of travel. I fell in love with Africa & still see it as my spiritual home. 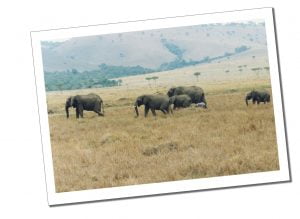 “So, in February in 1992 I found myself setting up my tent in a campsite in the Serengeti National Park. We followed the usual routine, put up our tents in a semi-circle around the truck, start a camp fire, cook & prepare dinner around the fire, followed by a few drinks & conversation. Which leads me to the point of this post…” 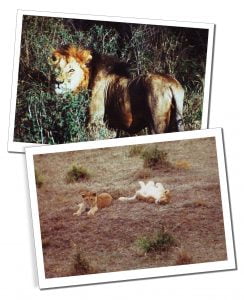 5 Ways To Avoid Getting Attacked By Lions:

1. Don’t tell stories about being attacked by lions

While we were tucking into dinner we spotted a serval cat & hyena who were eyeing us up in an interested manner, a little too close for comfort. As darkness fell, the noises seemed to be more & more amplified with howls and rustling close by. No matter how loud the noises got we were constantly reassured that they were a long way away. To make it even worse we decided to start telling stories about being attacked by animals & what we would do. This meant that if anyone wasn’t already freaked out, they soon became it. I felt relatively calm, there was no way they would allow us to camp in a place where there was a risk of any dangerous animals attacking. And anyway, they were all a long way away.

2. Don’t go to the toilet close to the camp

An important fact we learnt early on this trip is that animals are attracted to the smell of urine, so if you are going to the toilet (usually on this trip it was in the bushes), go as far away as possible from where you are camping. Unfortunately, we were all too freaked out by our own stories to go very far so for most of us our final pee before bed was behind the truck. For our resident couple (Tanya & Addo), it was very close to their tent.

3. Never, Ever, EVER leave your tent

At 2.30am I was woken by a really loud roar. It sounded like lions & it sounded really close. I was a bit nervous, but as earlier, convinced myself that it was a long way off. But it carried on for 1 ½ hours! As a nosey person, my instinct was to look out, just to check. Thankfully I chose not to. Fiona (our courier) slept in the truck every night, & had been woken by the noise. She proceeded to watch while 3 lions ran riot, playing around our camp. Her silent plea was that none of us came out of the tents as without doubt we would have been attacked. An important fact about going on safari is that lions see the big shapes so, if you stay inside the shape of your vehicle, they won’t see you. Move away & you could be in trouble! 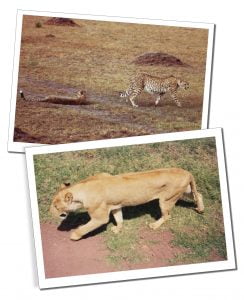 “Of course, we were all awake, terrified with various excellent weapons (pen knife?) at the ready, clinging on to tent poles in a desperate attempt to feel safe.”

The closest encounter out of us all was Tanya & Addo. They had been a bit lazy by not only going to the loo very close to the tent, but they had also decided against adding the flysheet (old school camping!). This meant they had limited space in the tent for their stuff so had just left it outside.

When the lions arrived, Tanya & Addo were first alerted by the sound & warmth of very heavy breathing – right by their heads. Then one of the lions decided they needed a rest so had slumped down, literally on the side of their tent. Fortunately, the tent stayed up but it meant they had to roll together to avoid being squashed. If the rest of us were scared, they were terrified!

By the morning, the lions had thankfully gone but we were all up early to share our stories, fears & disbelief. But they had taken a few things with them. Addo was left with 1 running shoe and a couple of the other girls had lost all the washing they had hung up to dry the night before (Patty found a red square of material which was all that was left of her favourite shorts, Annie found her shorts but they had a huge hole in the leg). All the other items which had been left outside the tents had teeth marks & holes in them. Patty & Annie had also gained a rip in their tent where one of the lions had tried to pull the tent bag out.

“We had made assumptions that there were big barriers up between the camp sites & the park – not true.

“We had made assumptions that we would have some kind of weapons available if we were ever in seriously danger – also not true. Apparently, our only line of defence was to throw saucepans (very effective against wild animals, I’m sure you would agree!)”.

Finally, if you ignore all the other points & decide to go camping in the Serengeti…

As the baboons came running through our camp the next morning we decided to skip breakfast, pack up quickly & get on safari. On the way out we stopped to report the incident to one of the security guards. Encouragingly, the response was “Oh that often happens in Camp Number 5!” Brilliant!! 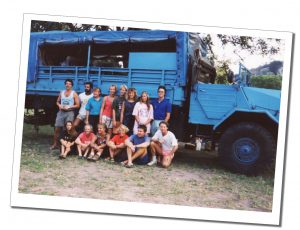 Where can you book a similar African Adventure?

Unfortunately, the company I went to Africa with is no longer operating (Kumuka Africa) and I currently have no experience of any of the African tours on offer.

If the idea of an overland trip & safari in this amazing continent appeal to you then these companies can help:

G Adventures & Intrepid Tours offer options & I would recommend either having used the companies for my recent trips in Peru & Bolivia respectively.

What do you think?

Where are your recommendations for African travel?

Why would you recommend any of these companies?

What experience do you have of any of these tours in Africa?

To see more of my photos just go to my Gallery page!

Everything You Need To Know Before Climbing Mount Kilimanjaro, Including Full Packing List

What To Expect When Climbing Mount Kilimanjaro. 8 Days on the Lemosho Route – Part 3 The Summit

Follow me to get travel inspiration & stories for female travellers who may be going solo for the first time. 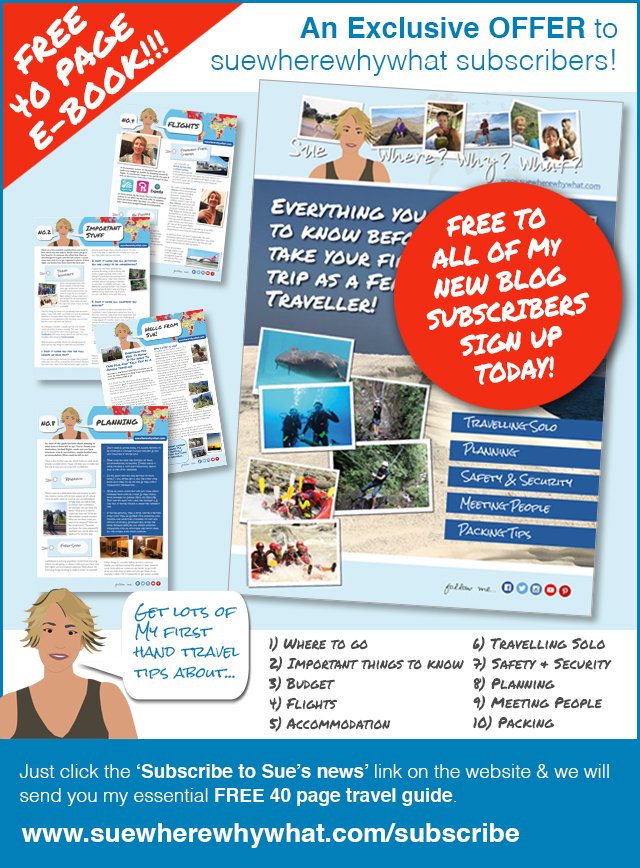 Sue Where Why What – So Far So Good!